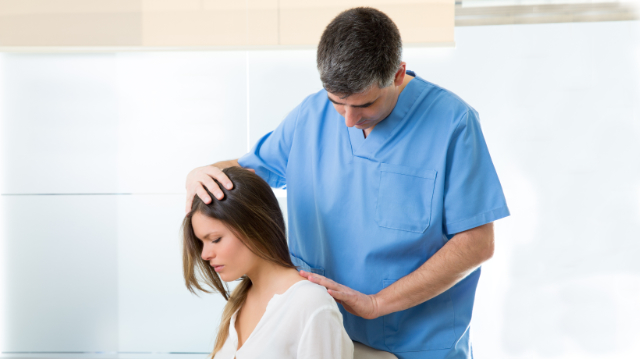 As we’ve explained, myofascial pain syndrome is one of the most common musculoskeletal conditions, with up to 85% of the population likely to be affected by it at some point. If symptoms arise—which are most likely to be noticed in the mid‐to‐upper spine—it can have a range of negative repercussions, including decreased work capacity, impaired sleep quality, and a worse overall quality of life.

Regularly performing the exercises that we described in our last post will undoubtedly reduce the risk for myofascial pain syndrome in the upper spine, but symptoms may still occur, since numerous factors contribute to the development of this condition. If you notice signs or symptoms of myofascial pain syndrome (eg, deep aching, throbbing sensation, tightness, or stiffness at or near tender trigger points in the upper spine), we strongly recommend seeing a physical therapist as soon as possible. Physical therapists utilize a variety of interventions that are all intended to alleviate pain and improve physical function.

One intervention called the pressure release technique is one of the most recommended manual therapies for myofascial pain syndrome in this region. It involves the therapist applying pressure to the upper spine for 30, 60, or 90 seconds with the goal of immediately relieving pain; however, the effect of each of these durations has not yet been studied. Therefore, a study was conducted to determine which duration of the pressure release technique is best for patients with myofascial pain syndrome.

60 patients randomly assigned to one of three groups


Researchers recruited patients to participate in the study who were aged between 18–40 years and who had at least one myofascial trigger point in the levator scapulae. This led to 60 patients being included, who were randomly assigned to one of three groups. Patients in each group underwent the pressure release technique to the levator scapulae, but the duration lasted for either 30, 60, or 90 seconds. This technique was applied with the physical therapist’s thumb or index and middle fingers directly over the myofascial trigger point, and the amount of compression was increased when the therapist felt a reduction in the resistance of the underlying soft tissues. All patients were assessed for their threshold for pressure pain, strength, neck range of motion, and stretch pain intensity immediately before and after the intervention.

Results showed that the pressure release technique led to several improvements at each of the three durations. However, comparing these values showed that the improvements were greatest in the 90‐second group, followed by the 60‐second group, and finally the 30‐second group. Most notably, patients who underwent the pressure release technique for 60 or 90 seconds experienced significant improvements in both strength and the threshold for pressure pain. This study suggests that just one manual therapy technique frequently used by physical therapists can lead to significant benefits for patients with myofascial pain syndrome.

In our next post, we’ll look at another study that highlights how various exercises used in physical therapy can also help patients with issues in the mid‐to‐upper spine.